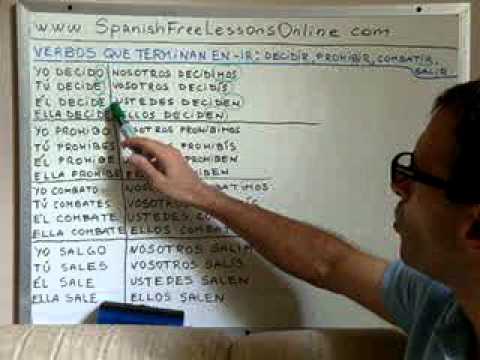 Spanish verbs are classified in 3 groups:

I have given you the rules on how to conjugate Spanish verbs that belong to the first two groups in the following previous lessons:

The 3rd group of Spanish verbs that we will learn today is the smallest of the three.

Here I will show you how to conjugate the following Spanish verbs from this 3rd group in the Simple Present. Note that any other regular Spanish verb will be conjugated using the same pattern that I will teach here.

As you can see, the root of the Spanish verbs are in normal font, while the endings are all in bold letters.

Look how the pattern is the same regardless of the verb. The root verb that we are conjugating (without the IR ending) plus the ending, which is the same for every verb (depending on who the subject is). So, you need to learn the correct endings and you will be able to conjugate all the regular Spanish verbs.

Also, I recommend all my students that follow my online courses to do the exams that I upload to my website. The topic of this lesson (Spanish verbs that end with IR) is included in Spanish Quiz Nbr. 4 (lessons 20 - 26).

Although we will be focusing more on vocabulary and grammar, pay attention to the Spanish pronunciation in these video lessons, and remember to practice repeating the same words and sounds.

To enlarge the video-screen to full-screen size, click on the right icon on the lower right corner of the video.