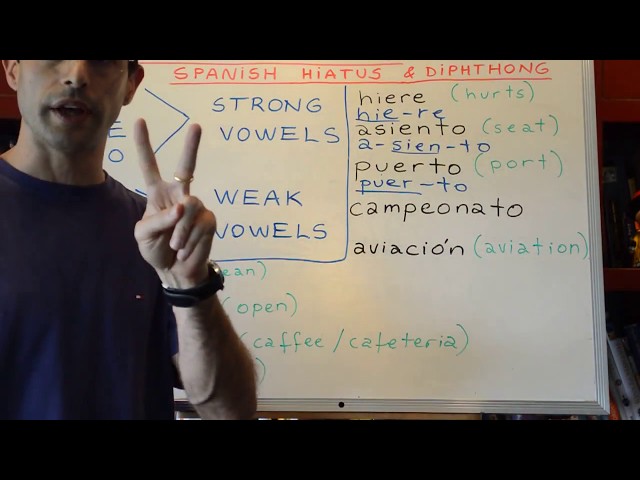 In our lesson Nbr. 294 I taught the 1st of the 4 Spanish accent rules. In order to learn the 2nd one, it is imperative to learn and go through Spanish diphthongs and hiatus.

Before learning what Spanish diphthongs and hiatus are, we need to learn that Spanish vowels are separated in 2 different categories: Strong & Weak

WEAK VOWELS: I, U

What is a HIATUS: We have a hiatus when two vowels that go together in the same word, are separated each one in a different syllable.

Lets think of vowels in this way:

When we separate a word in syllables, weak vowels cannot be separated form their partner. Why? Lets say that just because they are "weak".

Strong vowels can be split, because they are "strong" (this is the most intuitive way of thinking of it and understanding the rules).

When do we have SPANISH DIPHTHONGS: A diphthongs applies when a word has two vowels together, and these vowels are either:

Per the rule we just mentioned, a weak vowel cannot be split from her partner vowel. Therefore, here the vowels need to stay together in the same syllable. Thus, we have a Spanish diphthong.

When do we have a SPANISH HIATUS: A hiatus applies when a word has two vowels together, and these vowels are 2 strong vowels.

Since strong vowels can be split from their partner-vowel, then these 2 strong vowels are separated into 2 different syllables. Thus, we have a Spanish hiatus.

OBSERVATION: If the stress of the word is on a weak vowel, then this vowel behaves as a strong vowel. Thus, instead of a diphthong we may have a hiatus, because a weak vowel became "strong" (and this weak vowel therefore should carry a Spanish accent).