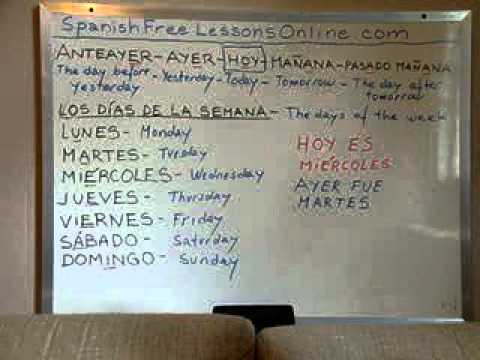 Spanish days of the week and their planetary correspondence

Since ancient times each day of the week was associated with one of the seven planets that were known to the ancients.

That is how each one of the days of the week was thought of. Each day was mainly under the influence of one of those seven "planets".

In this video-lesson we'll learn the Spanish days of the week and some few other words. I will show you how to pronounce each word and we will practice doing some sentences as well.

We will also use these words:

Try to pronounce each word, each sound, the same as I do, so you get used to using your mouth and tongue to pronounce like in Spanish. Let me know if you have any questions :-)

You can find a full list of all the video lessons by clicking on the List of Lessons tab on the Main Menu.

To enlarge the video-screen to full-screen mode, click on the right icon on the lower right corner of the video.