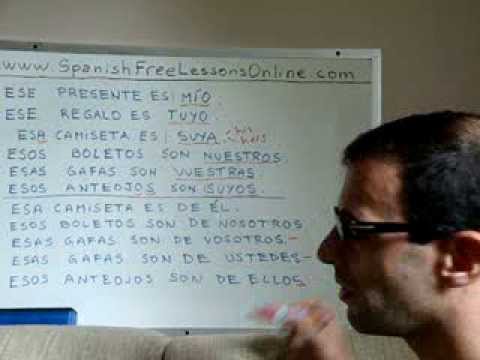 Since Possessive Pronouns in Spanish are so related to Possessive Adjectives, lets begin by explaining the main different between both of them:

- Pronouns: They take the place of a noun
- Adjectives: They only describe a nouns or provide additional information

Therefore, lets take a look at these two sentences below and see the difference:

The first sentence is an example of a Possessive Adjective. You can see that the word "mi" (my) provides additional information. It tells that whatever we are talking about is mine.

The second sentence is an example of a Possessive Pronoun in Spanish. Here you can see that the word "mío" (mine) is, in fact, replacing the noun.

- Ese presente es mío - That present is mine
- Ese regalo es tuyo - That present is yours
- Esa camiseta es suya - That t-shirt is his/hers/yours (formal)
- Esos boletos son nuestros - Those tickets are ours
- Esas gafas son vuestras - Those glasses are yours (plural; used in Spain)
- Esos anteojos son suyos - Those glasses are theirs/yours (plural; used in Latin-America)

I recommend all my students that follow my online courses to do the exams that I upload to my website. The topic of this lesson (Possessive Pronouns in Spanish) is included in Spanish Quiz Nbr. 5 (lessons 27 - 34).