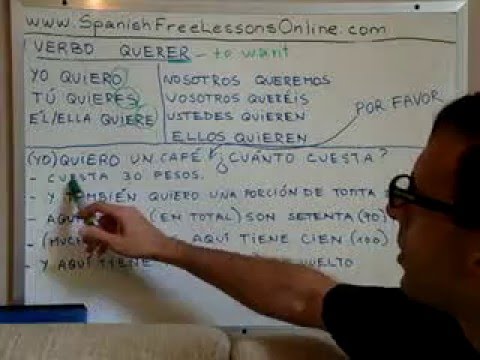 In some of our previous lessons I mentioned the 4 most fundamental Spanish verbs: SER, HABER, ESTAR and TENER.

If we had a 5th most fundamental verb, that would be the Spanish verb QUERER (or verb TO WANT in Spanish).

QUERER is a modal verb. That is why it is so important. Modal verbs are those verbs that can be followed by other verbs.

Quiero comer (I want to eat)
Quiero correr (I want to run)
Ella quiere almorzar ahora (She wants to have lunch now)
Ellos querían ir (They wanted to go)
Queríamos irnos (We wanted to leave).
As you can see in the sentences above, the verb QUERER (verb TO WANT in Spanish) is followed by another verb. This is what makes Modal Verbs so special and unique. You cannot do this, for example, with the verb "to run". We cannot say, for example: I run to eat. Or, if we do, we know that it is incorrect :-D

Of course, Spanish verb QUERER can be also used like a any other verb.

Quiero una manzana (I want an apple)
Quiero más (I want more)
No quiero más (I don't want anymore)
Queremos comida (We want food)
Él quiere un nuevo teléfono celular (He wants a new cell-phone)
Lo quiero (I wan it/him)
La quiero (I want it/her)
In our present video-lesson I will show you how to conjugate the Spanish verb QUERER in Simple Present. After that I will present you some few example-sentences.

Try to listen to the pronunciation, watch the spelling, how the verb is used in sentences.

You can find a full list of all the video lessons by clicking on the List of Lessons tab on the Main Menu.